NASHVILLE, Tenn. – The Gospel Music Association celebrated the 50th Annual Dove Awards with a sold out crowd in Nashville, TN. The special evening shined a light on Christian and Gospel music's rich and diverse history and showcased the future of exceptional artistry. The awards will be televised on TBN (Trinity Broadcasting Network) on Sunday, October 20 at 8 p.m. EST / 5 p.m. PST. The big winners of the night were songwriter Jason Ingram with four Dove Awards, and Lauren Daigle, who took home three awards. Daigle won awards for “Song of the Year,” “Artist of the Year” and “Pop/Contemporary Album of the Year.” Composer Wayne Haun along with producer Paul Mabury also won three awards while Gospel singer Kirk Franklin, Tasha Cobbs Leonard and Lecrae took two. First-time winners of the night included Aaron Cole, “New Artist of the Year,” Phil Wickham, "Worship Recorded Song of the Year," and Keith and Kristyn Getty, “Inspirational Album of the Year.”

ARTIST OF THE YEAR: Lauren Daigle 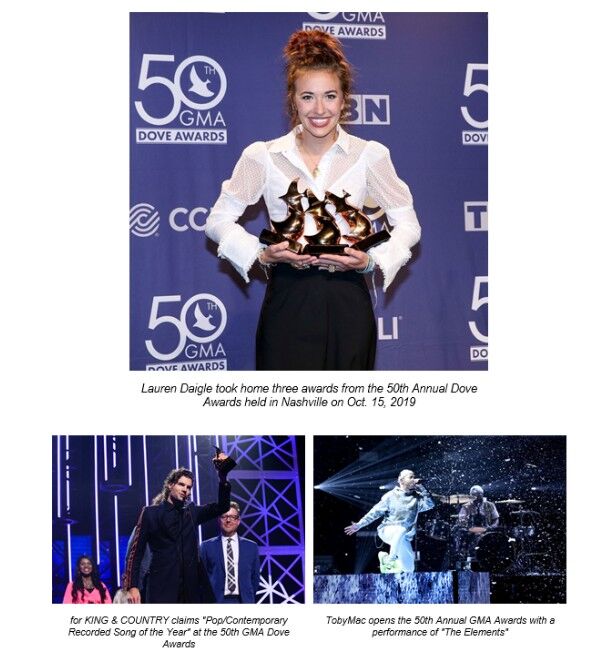 This is an honor for many reasons but one, to see the support of so many people- it's overwhelming." - Lauren Daigle, "Artist of the Year," "Song of the Year" and "Pop/Contemporary Album of the Year"

"There’s richness in diversity, and I’m seeing it tonight. It’s something we have to take into this world. We are required to share this love with the world. We are beautiful when we are together." - TobyMac, "Contemporary Christian Artist of the Year"